Data Structures are the programmatic way of storing data so that data can be used efficiently. Almost every enterprise application uses various types of data structures in one or the other way.

As per the above illustration, following are the important points to be considered.

Linked list can be visualized as a chain of nodes, where every node points to the next node.

Adding a new node in linked list is a more than one step activity. We shall learn this with diagrams here. First, create a node using the same structure and find the location where it has to be inserted.

This will generate the following link between new and right node.

Now, the next node at the left should point to the new node.

This will put the new node in the middle of the two. The new list should look like this

Similar steps should be taken if the node is being inserted at the beginning of the list. While inserting it at the end, the second last node of the list should point to the new node and the new node will point to NULL.

Deletion is also a more than one step process. We shall learn with pictorial representation. First, locate the target node to be removed, by using searching algorithms.

We can keep that node in memory otherwise we can simply deallocate memory and wipe off the target node completely using free() function in c++.

As per the above illustration, following are the important points to be considered.

Following code demonstrates the insertion operation at the beginning of a doubly linked list.

Following code demonstrates the deletion operation at the beginning of a doubly linked list.

Insertion at the End of an Operation

Following code demonstrates the insertion operation at the last position of a doubly linked list.

In singly Circular linked list, the next pointer of the last node points to the first node. 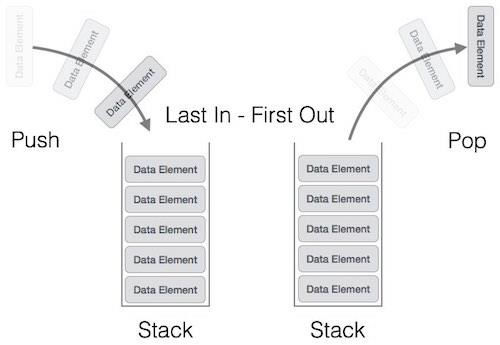 A stack can be implemented by means of Array, Structure, Pointer, and Linked List. Stack can either be a fixed size one or it may have a sense of dynamic resizing. Here, we are going to implement stack using arrays, which makes it a fixed size stack implementation.

A Pop operation may involve the following steps −

As in stacks, a queue can also be implemented using Arrays, Linked-lists, Pointers and Structures. For the sake of simplicity, we shall implement queues using one-dimensional array.

Queues maintain two data pointers, front and rear. Therefore, its operations are comparatively difficult to implement than that of stacks. 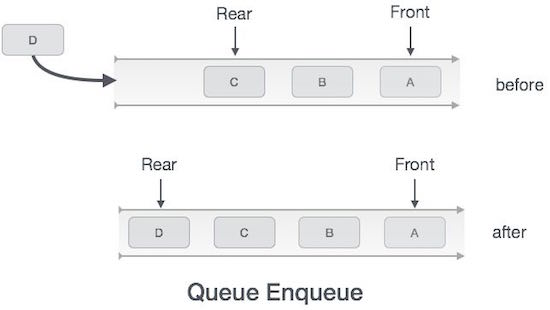 Sometimes, we also check to see if a queue is initialized or not, to handle any unforeseen situations.

Accessing data from the queue is a process of two tasks − access the data where front is pointing and remove the data after access. The following steps are taken to perform dequeue operation − 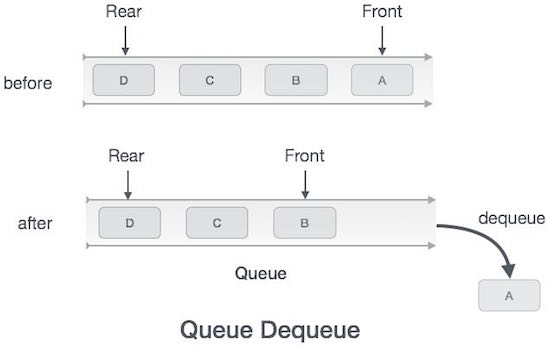 Operations on Deque:
Mainly the following four basic operations are performed on queue: 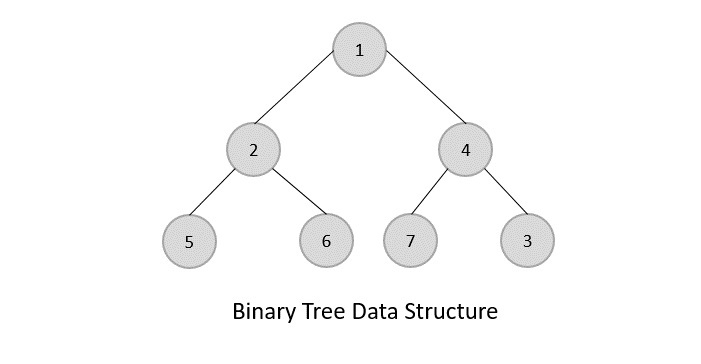 Following are the important terms with respect to tree.

We're going to implement tree using node object and connecting them through references.

The code to write a tree node would be similar to what is given below. It has a data part and references to its left and right child nodes.

The basic operations that can be performed on a binary search tree data structure, are the following −

There are three ways which we use to traverse a tree −

In this traversal method, the left subtree is visited first, then the root and later the right sub-tree. We should always remember that every node may represent a subtree itself.

If a binary tree is traversed in-order, the output will produce sorted key values in an ascending order. 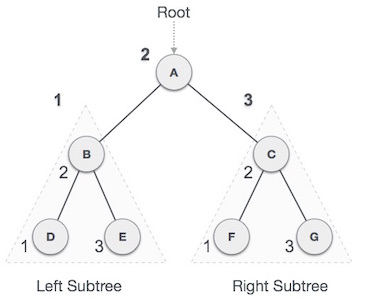 We start from A, and following in-order traversal, we move to its left subtree B. B is also traversed in-order. The process goes on until all the nodes are visited. The output of inorder traversal of this tree will be −

In this traversal method, the root node is visited first, then the left subtree and finally the right subtree. 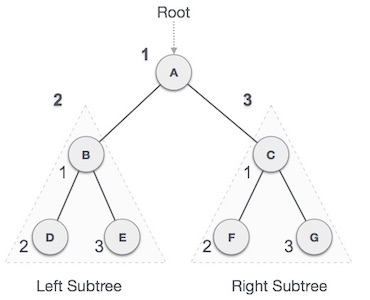 We start from A, and following pre-order traversal, we first visit A itself and then move to its left subtree B. B is also traversed pre-order. The process goes on until all the nodes are visited. The output of pre-order traversal of this tree will be −

In this traversal method, the root node is visited last, hence the name. First we traverse the left subtree, then the right subtree and finally the root node. 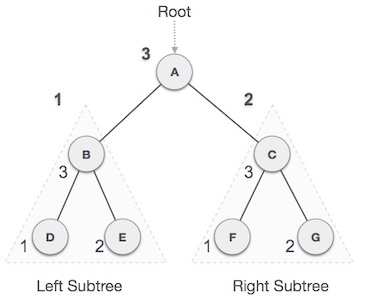 Searching a key
To search a given key in Binary Search Tree, we first compare it with root, if the key is present at root, we return root. If key is greater than root’s key, we recur for right subtree of root node. Otherwise we recur for left subtree.

Insertion of a key
A new key is always inserted at leaf. We start searching a key from root till we hit a leaf node. Once a leaf node is found, the new node is added as a child of the leaf node.

When we delete a node, three possibilities arise.

1) Node to be deleted is leaf: Simply remove from the tree.

2) Node to be deleted has only one child: Copy the child to the node and delete the child

3) Node to be deleted has two children:

1) Find inorder successor of the node.

Note that inorder predecessor can also be used.