Laboratories. C is a general-purpose language which has been closely associated with the UNIX operating system for which it was developed. C provides constructs that map efficiently to typical machine instructions, and therefore it has found lasting use in applications that had formerly been coded in assembly language, including operating systems, as well as various application software for computers ranging from supercomputers to embedded systems.

The smallest individual unit in a program is known as a Token. C has the following token:

printf("Welcome to IIIT Gwalior");  //prints the given message on the console

return 0;         //indicates that execution of program is successful

It is a character encoding standard for electronic communication. ASCII codes represent text in computers, telecommunications equipment, and other devices.

The ASCII table is given below:

Operators are used to represent operations in C.

The difference in these operators can be shown by the following diagram: 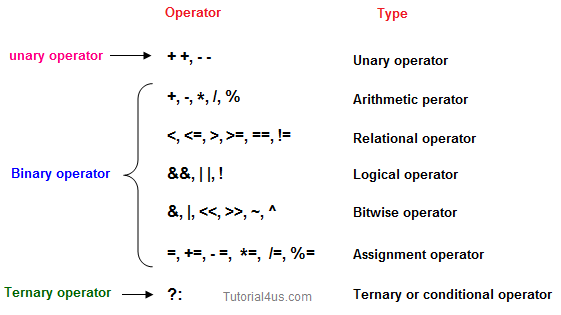 The following table lists the precedence order of operators:

The Flow of Control:

Statements are instructions given to the computer to perform any kind of action (like data movement, making decisions, repeating actions).

Depending upon the kind of action, statements may be of following types:

Statements that take action depending on a condition.

The following code explains the functioning of if-statements.

Allow a set of instructions to be performed repeatedly until certain condition is fulfilled.

An array is a collection of variables of the same type that are referenced by a common name. The data type of base elements is known as the base type of array. An array is given a name and its elements are referred to by their subscripts or indices.

Arrays are of different types:

The diagram below shows the how an array is stored in memory:

A function is a named unit of a group of program statements. This unit can be invoked from other parts of the program as and when required.

It is a declaration of the function that tells the program about the type of the value returned by the function and the number and type of each argument.